A Day with God

A huge ‘thank you’ to all who were involved in the prayer day. It was great to see so many people there!

The interactive journey through the Lord’s Prayer provided lots of ways to engage with God:

The first station invited people to use fluorescent paints to write a name for God on some foam, which was then stuck inside a darkened gazebo. You could then explore the tent using a UV torch to make the paint glow!

At the second station we prayed for God’s Kingdom to come around the world by sticking shaped post its on a map: 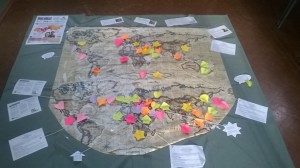 Station 3 involved icing and toast as we gave thanks to God for our daily bread and all his blessings.

Trespassing involves crossing a line and God has told us how we should live and the lines we shouldn’t cross. We were encouraged to think about these as we walked round the ‘No Trespassing’ zone before moving into the centre. There we said sorry to God and put a fizzy tablet in a bowl of water – as it dissolved we remembered God’s forgiveness and asked him to help us forgive other people. 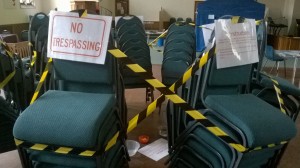 Station 5 encouraged us to use the Word of God and his armour to tackle problems in our lives by rolling cylinders called ‘faith’ or ‘joy’ to knock down skittles of ‘bitterness’ or ‘sorrow’. 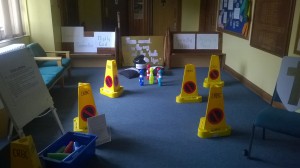 Finally we declared that everything belonged to God, replacing dull black letters with sparkly, colourful ones.

Elsewhere in the building we enjoyed led sessions on different topics and spending time in the reflective zone.