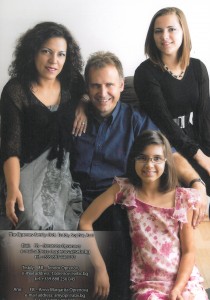 Teddy is Pastor of Sofia Baptist Church and General Secretary of the Baptist Union in Bulgaria. He is also President of the Good Samaritan Foundation (a relief charity based in the church). Didi is President of the Baptist Women’s Organisation. The couple came to Bristol to study in 1996 and a partnership was formed between their church and Cairns Road. Partnership events have included a marriage weekend in Bulgaria, a visit here by the Bulgarian youth team and a joint weekend conference in Bulgaria.

In addition Sofia Baptist Church is in the process of building a new church and Social Centre and a trust has been set up in the UK for fundraising. Geoff Wallis of Cairns Road is the Honorary Secretary of this: www.bulgarianpartners.org

The centre was completed and signed off in August 2015 and the official opening was in September 2015.

There are still ongoing fundraising efforts to help furnish the centre:

Saturday 21st May 2016: A sponsored prayer walk around Bristol